The new SKYWORTH 8K OLED TV has the best picture quality that SKYWORTH has ever created. With a resolution of 7680x4320 pixels, which is 4 times more than the 4K TV, it’s also equipped with a 130MP OLED display, presenting richer colors, depth, and details to bring viewers an absolute visual spectacle.

Since launching the first mass-produced OLED TV in mainland China in 2013, SKYWORTH has continued to receive praise and acclaim from users over the past eight years. Attesting to the superior picture quality of SKYWORTH TVs, this also reflects SKYWORTH’s dedication to creating a superior product experience, including SKYWORTH’s commitment to protecting the eye health of users. 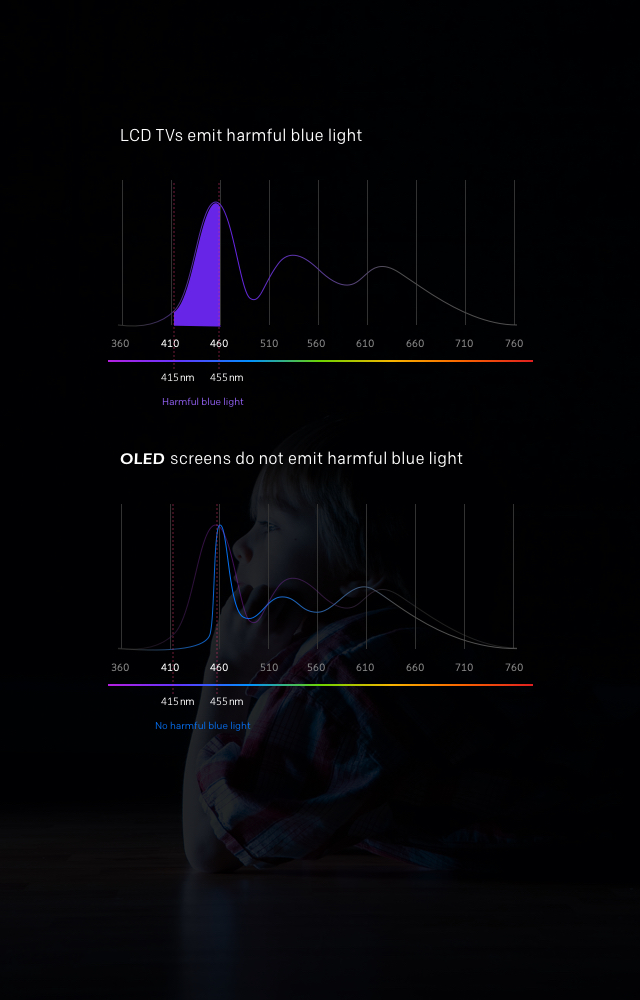 SKYWORTH W92 is equipped with SKYWORTH AI PICTURE QUALITY ENGINE™ 8K Version. By searching, identifying, and re-structuring pictures with AI technology, the engine optimizes picture quality in real time. The flagship SoC has an APU, which manages picture signal processing. Running at a powerful 1.6 TOPS, the APU supports a wide array of AI functions and is equipped with two extra independent picture quality chips. This not only achieves 8K 120FPS MEMC, but also adapts its other functions to those of 8K TV.

Capable of Doubling the Optimal Brightness of the Screen Partially 1

On Set with the Director

Thanks to the 3D LUT technology, SKYWORTH W92 achieves an extraordinary △E=0.98 broadcast-monitor-level color accuracy, delivering a true-to-life onsite view of film sets to bring the creator’s vision to life in living rooms around the world. 3

Pushing the Boundaries of Brightness and Darkness

SKYWORTH AUDIO is an industry-leading acoustics technology. By integrating three different modules of sound effects, core acoustics technology and a multi-channel speaker system, SKYWORTH is committed to bringing more realistic and amazing sound experiences to consumers around the world.

SKYWORTH AUDIO GLASS SOUND is a new type of acoustics technology used on high-end products produced by SKYWORTH. It uses a whole sheet of glass as the diaphragm and distributes four 30-core electromagnetic drivers evenly across the glass, causing it to vibrate and produce sounds. Sound waves are produced by the entire surface rather than at individual points. This shift ensures a clear sound transmission and an evenly distributed sound field. The technology reproduces the sounds of live scenes so that users can enjoy the best sound experience anywhere in a room.

To achieve a more accurate high pitch and enable a better synchronization effect, SKYWORTH is the world’s first company to use the standard Air Motion Transformer in renowned speaker systems in TVs.

The high frequency is increased to 40KHz

Each adjacent surface of the folded diaphragm is in relative motion. When driving the same volume of air, the diaphragm vibrates in a much smaller amplitude and at a faster speed, and thus, achieving better high frequency extension and faster transient response speed.

The high frequency sound pressure is higher than 89dB

The area of the diaphragm of the Air Motion Transformer is around 1,800 mm² after unfolding, which is 2.5 times larger than that of a dome tweeter unit. Hence, it drives a higher volume of air. At the same time, the air is squeezed out between the folded gaps (like compressing and expanding the bellows of an accordion), and thus, the sound energy is faster and stronger than that created from the diaphragm vibrating directly in the air, and the speed is about 5 times faster than that of a dome tweeter. 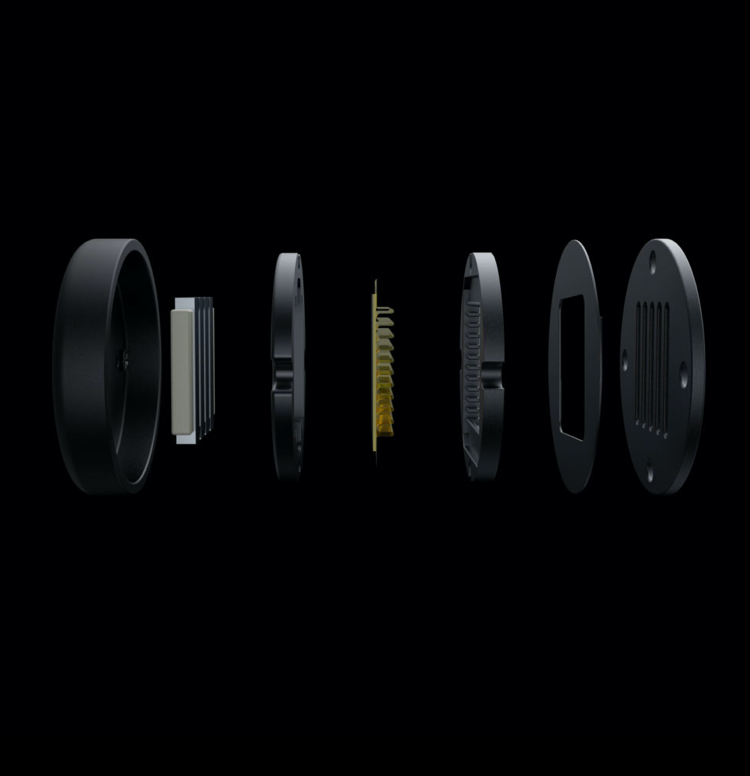 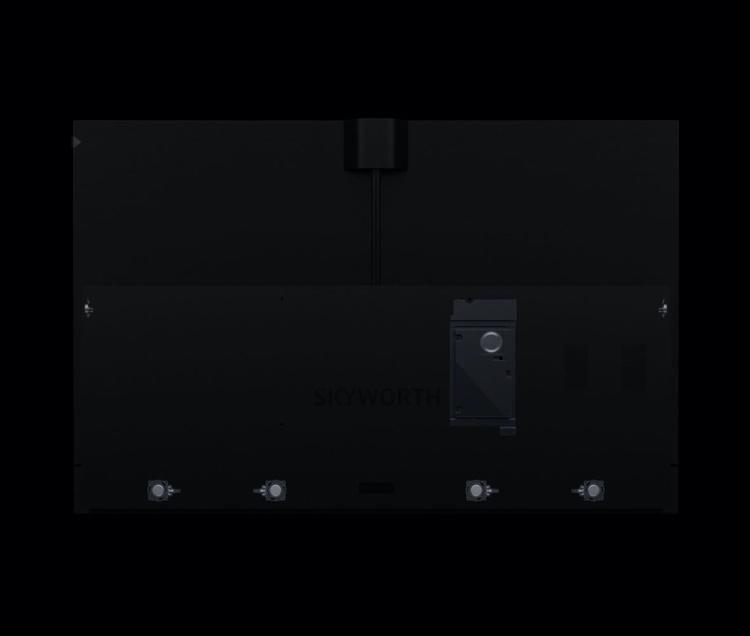 The slim body and minimalistic design resemble the calm and clear lake of the Verdon Gorge.

With a design concept of “wise”, “harmonious” and “delicate” in mind, SKYWORTH W92 reflects SKYWORTH’s vision of the future, creating the perfect balance of technology, art, and the environment. SKYWORTH is dedicated to developing the best audiovisual TV experience and envisions to create an extraordinary space with a sense of closeness and comfort for users to immerse in while enjoying a superb TV entertainment experience.

Inspired by the aurora borealis in the Arctic and striking lights found in high-end sports cars, the set of ambient lights at the bottom of the rear case illuminates different colors to match your chosen TV mode, including power on and off, TrensAI VOICE™, music, and more, to create a vibrant atmosphere whatever your mood may be.

Seeing the Extraordinariness in Static and Moving Pictures

The SKYWORTH W92 is the first model to be equipped with a 12-million-pixel high light intake PTZ (pan-tilt-zoom) AI camera. It can perform a 3-axis automatic rotation angle adjustment and real-time human tracking with 30 degrees of horizontal rotation each side, 60 degrees of vertical rotation upwards and 14 degrees downwards, presenting a full-angle tracking shot and automatic rotation functions. This brings an ultra-large viewing angle that allows users to experience the extraordinary quality in both static and moving pictures.

SKYWORTH W92 is equipped with MediaTek S900, the industry’s most powerful flagship TV SoC. The SoC adopts a low-power-consuming 12FFC technology, which helps to strike the best balance between efficiency and low power consumption. Using a quad-core A73 cluster with 8.5GB of RAM, W92 delivers a smooth and seamless experience to users.

The latest TrensAI™ equipped inside SKYWORTH W92 enables bilateral audio and visual interactions. It is a smart home assistant that is on standby 24/7 and can give users real-time and intelligent responses.

SKYWORTH W92’s built-in microphone adopts an independent DSP chip to process voice algorithms without consuming CPU resources, allowing the whole system to run more smoothly. When SKYWORTH W92 is on standby, the CPU does not need to be activated, significantly reducing power consumption whilst still enabling voice control interactions at the same time.

Knows You Better with Time

TrensAI EYE™ supports various scenario-specific services that are based on the capability of the PTZ (Pan-tilt-zoom) AI Camera. The Family Carer function allows users to check on their homes in real time from their mobile phones, perfect for those who wish to look after the elderly or children while being away from home. Users can also rotate the camera to take wide-angle family portraits with no members left out due to the restricted frame. AI tracking auto-focus video calls allowing up to six users simultaneously are also supported, connecting families and friends whenever and wherever. Harnessing AI tracking auto-focus technology and ultra-wide-angle character tracking functions, users are always placed in the center of the screen.

Swaiot, together with Swaiot PANEL, unleashes intelligent and connected household capabilities. Swaiot has made intelligent connections possible by creating a big-screen hub where users can view, control and manage Swaiot devices around their homes from their TVs. By connecting to the Swaiot PANEL, SKYWORTH W92 further extends the applications of AIoT and far-field cross-screen interactions.

SKYWORTH W92 features a built-in dual-band, dual-antenna Wi-Fi 6 module. The signal gain of each antenna is up to 3dBi, and the highest speed is 1.2Gbps, which ensures a seamless 8K viewing experience. Users can also enjoy a next generation and seamless gaming experience through the cloud platform, whilst the HDMI 2.1 port ensures the smooth transmission of 8K signal.